Can Your Pussy Do The Dog?.. It Certainly Can!!

..a tribute to the not so early, but still great Lux Interior , late of the Cramps, who shuffled off his mortal coil earlier this year. This post will grow as I sort pictures and video, so give me a day or two . The videos for Jeepers Peepers will NOT be youtubed unless they specifically want them done.

The night was organised by Mr Dave Campbell , circus master extraordinaire, providing us with a veritable cornucopia of delectably depraved entertainment , in keeping with the memory of Lux Interior.

The excellent Jeepers Peepers Burlesque group opened up the festivities and provided superb diversions throughout the night...

Here's some images from the event , accompanied by Link Wray's "Rawhide" available here.

Incidentally the Cluny are hosting the "Female Tournament of Tease" to select the "Naughty North" entry. 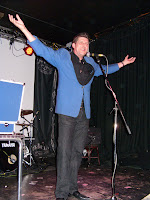 We then had a suitably shambolic magician Steve Drayton, straight out of the Wheeltappers with an array or tricks and jokes which stretched the meaning of the word "entertainment" . Definitely he has to be seen to be believed!! 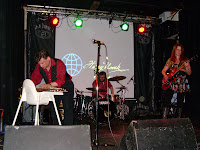 First band of the night were Staggerin' Jon Lee and His High Class Chancers with and interesting fermentation of Link Wray , Pedal Steel , and Fifties crooning, appropriately attired!! 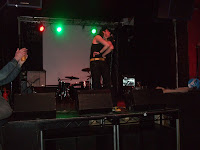 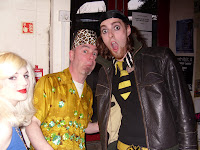 Then came bug eyed escapologist
Chris Cross seen with the
master of ceremonies (left)
and on stage (right).

Due to a band dropping out , Ratty and The Shitkickers, filled in
admirably with their own brand of entertaining psychobilly. 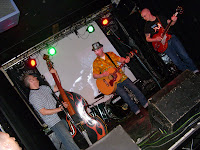 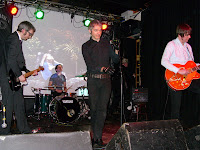 
The finale was the almighty Coyotemen, all backed by some incredible B movies ("The Mad Butcher", "Frankenstein's Castle of Freaks" and "Teaserama" are three that I can recall at this point). All this cost a fiver . It was really like have your very own time machine!! Besuited , and suitably masked the set was a litlle slower than normal as this was a Cramps Tributes , but still as impressive as ever , and it was good to hear that the still "Take Shit From No One"!!!! 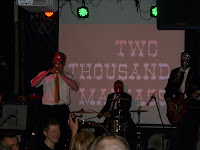 ....and finally The Coyotemen's rendition of "Teenage Werewolf"