The Good, The Bad, and The Abominable Showmen - Tyneside Irish Centre - Thursday 4th November 2010 - The Result 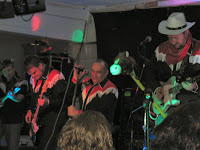 Just to let you know that we raised £530 for LIVErNORTH in memory of Karen Gault.

I will be sending the cheque soon.

Thanks again to everyone who helped making this possible.

See you all again in May for the next one which will be for Bruce. 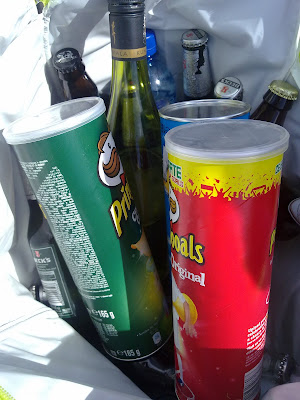 This years's Mouth of Tyne Festival again got perfect weather and was the best attended one I've seen so far. The website is here. The downside of this was that the food and drinks trailers had permanent queues which we circumvented by bringing in our own drinks which meant we could lie on the grass , talk and listen to the bands in glorious sunshine , not having to move to get a drink. The contents of our pack looked like this at some point in the afternoon.

The only time we had to move was to get up for a toilet break, and must admit the portaloos were spotless and almost pleasant to use!!! Maybe that's a sign of age.

Only caught four of the acts.

Walked in on Beth Jeans Houghton & The Hooves of Destiny who were excellent crowd pleasers , and included a cracking version of "Devil In Disguise" . Well worth tracking down and here's a litle video of them below:
Next up were the Batacuda Sound Machine from Auckland New Zealand (web site here) who served up some festival friendly funk. Them live below:

Next up were the hit of the day , The Easy Star All Stars , who entertained with dub and reggae versions of most of Sergeant Peppers , Pink Floyd's Money , Radiohead's Paranoid Android and closing with Karma Police . An odd choice to finish with but awesome and perfect festival entertainment especially in the sun . You can download their albums here , and see them below doing "Money":
Headliners were the Lightning Seeds , but without England in the World Cup Final (which wasnt gonna happen) they had their work cut out . The opened with "Sense" my absolute favourite and managed to keep big chunks of the crowd dancings even through the ill advised cover of Phil Spector's "Be My Baby". Below is an acoustic rendition of Sense:

All in all another excellent Festival , looking forward to next years!!
Posted by Mikey Dred at 06:29 No comments:

The Good, The Bad, and The Abominable Showmen - Next Gig Tyneside Irish Centre - Thursday 4th November 2010 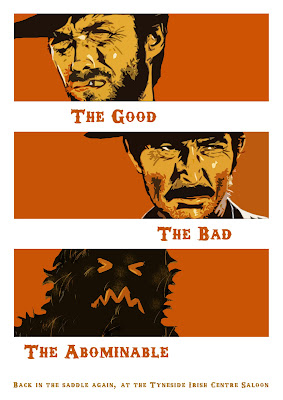 The next Abominable Showmen gig will take place on Thursday 4th November at The Tyneside Irish Centre, and will have a Country / Western / Cowboy theme to it

Tickets will be £4 and T-shirts will also be available, design to be confirmed but Chris will come up with something special as usual.

Let me know if you would like to come along.