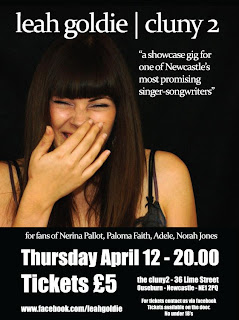 ...to see Leah Goldie at The Cluny 2 on 12th April 2012. I'd been told she was in the same ballpark as Adele , and this was my first time at the venuw , very pleasant and civiliesd it is too.

Anyway after having a huge vegetarian Chilli at The Cluny which I only half finished , we ambled down to the venue and were treated to 45 minutes ove excellent Adele type songs . My only criticism was that there was little interaction with the crowd until she said the last song was for her slittle sister who'd almost thrown a tantrum because she couldn't come due to the age 18 restriction at the venue.

She finished her set and then was dragged back on stage to take applause ....... by Leah Goldie!!! It turned out the girl I thought I'd come to see was a 15 year old called Imogen Williams , all of a sudden my slight criticism fell into perspective. She was amazingly composed while performing and possibly coming to the last number made her feel a bit easier ,but a brilliant set worth the price of admission alone.

45 minites later Leah Goldie appeared on stages to perfrom songs from her new album. Leah is 26 I thingk , so half my age , and played an excellent set resulting in a lot of CD sales. She reminds me a little of Tori Amos , but with a piano style theat reminds me of Peter De Havilland and David Ackles , but she finished with an excellent gospel blues original  "Waiting For You". A couple of songs including "Silence" were accompanied by a guy called Peter on guitar , but all in all an excellent night with two wonderful talents .

This is  What's The Deal: