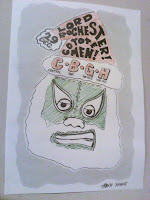 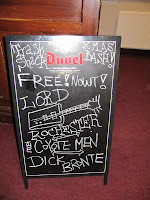 I got in at 1am today which is quite late for me on a school night , after attending this excellent 3 band trash bash at The Central Bar in Gateshead. The line up was (in order of appearance)

The first two bands I knew , but Lord Rochester only through word of mouth and Youtube!!.

The place was jumping and standing room at a premium , but from the first notes it was obvious that the mini multicoloured coxcombed soundcrew were spot on .

Dick Bronte sounded good and everyone remarked it was the best they'd every seen them. Lead singer Kenny was in great voice as well as providing eye candy for at least a few ladies I know , while bearded Phil's guitar sounded great and the rhythm section were excellent .  They specialise in obscure rock and roll , and grarge rock and a solid version of Rufus Thomas' "Walkin' The Dog" , was accompanied by an impressive take on Dave Bartholomew's "The Monkey Speaks" , and a darkly comic "Black Cadillac" amongst others . A superb opening set for the night. 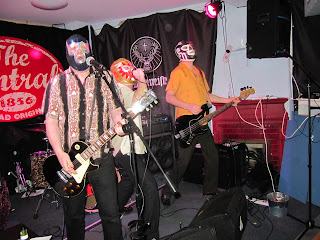 Next up were The Coyotemen , still "taking shit from no man" , in which mild mannered pub host Dave Campbell is transformed in to silver Mexican Wrestling Masked wild rockin' animal "Ratty" Coyoteman , jumping from floor to wall to ceiling , running through classics such as "Any Port In A Storm" , "Loopy Lopez" , "Primitive Urge" and lots lots more. Sound again spot , although Ratty reckoned someone had knocked his microphone out of tune , but the sounded great to me , and the crowd agreed. How much good staff can you get in a single night!! And there was more....


Headliners were the impecably turned out Bo Diddley guitar toting Lord Rochester , with Lady Muck loking lovely on her McCartneyesque Hofner violin bass providing solid rhythm with sophistication , and on drums the marracas weilding Scot Siberian Tim. A heady mix of originals an covers "C.A.D.I.L.L.A.C." , "I tried to send a monkey by UPS" , "Deathbed" , "Seasick" as well as Chuck Bery's "Almost Grown" , and Bo Diddley's "Hey Bo Diddley". A revelation and will be definitely seeing them again (well all the bacds)