Anyway back to the musical acts I caught:

A wonderful finish to a wonderful day. My CD colletion and general well being extended by the experience !!
Posted by Mikey Dred at 14:07 No comments:

The omens for this year's Mouth of Tyne Festival didn't bode too well. The street entertainment in previous years had been reducing , this year's headliners wer Heaven 17 , not my idea of a headliner and the cost of tickets for the Sunday gig was now £10 a ticket and £5 for children. Added to that the weather in the run up had been mostly torrential rain.

Sunday morning glorious sunshine ,  great start to rhe day. Arriving in Tynemouth I found  I'd missed The Undertones  , Richard Hawley , The Wanted & McFly and the Festival actually started on Thursday , but I didnt have the cash or time to see the other act, and some of tem I would rather not see!!

Lots of street entertainment and the weather stayed good . Two highlights were a couple of weird cycly taxis for children which were going down very well. The trad jazz stage att the entrance to the Priory is still there and the crowd in front fairly rammed. Always well attended.

Tickets for the Sunday were sold out like last year , and so on to the Priory having missed the openers The Caffrey Brothers. So this is how it went:

So another brilliant final day for the Mouth Of Tyne Festival.

The Cult of Hoult's Yard 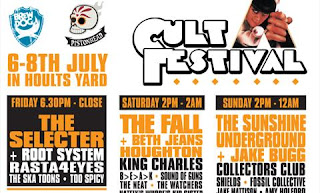 This weekend I attended one of the best day's music I have seen in ages. The Hoult's Yard Cult Festival  provided some amazing stuff. Three stages , one outdoor , one in Warehouse 34 and one in a garage provided some excellent music. I'm. just going to list what I saw as I missed a lot just becasue of the high quality of everything on offer.

I got there via a Q1 bus , but the place is not very well signposted, but once in there noticed that there werent too many people around , the advertising and local coverage had not been too heavy to say the least. The Yard was dominated by a huge fairground ride surrounded by fairgound junk food stalls mixed with quality sellers such a Safari Burgers , Juniper's Pantry , Idlehands Cup Cakes and an excellent organic cafe who's name slips my mind but sold their coffee in mugs with a 50p deposit. As Kirsty poited out it was Beat Root cafe , brilliant !!

A combination of  tight short set by high quality bands made this a superb memorable day for everyone there , and for everyone who wasn'y .... you don't know what you missed !!
Posted by Mikey Dred at 19:41 1 comment: