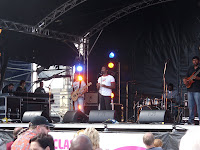 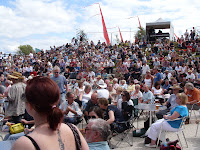 The Summer Festivals are coming thick and fast and the Tyneside Americana Festival under the Summertyne banner is another great one.This year must be the best one yet with a superb turn out and an incredible line up. Some goigs are paid and some are free and it's a combination of live acts and films shown both inside and outside of the Sage.

Because of the clashes , the fact that there was hardly an inch of free space outside , the hot sun and all that , I ended up catching just a couple of the acts .

Two Fingers of Firewater and Eliza Gilkyson produced some excellent country sounds , but unfortunately I missed out on the headlining Hot Club of Cowtown , due a major sun induced headache.

However Ryan Shaw was a major revelation , the band starting with a reasonable funk / soul instrumental workout , before Ryan appeared with a stunning rendition of the Jimmy Cliff song "Many Rivers To Cross" , this was followed by one of their own song featuring gorgeous backing vocals from the band. If you want to download the album you can download it here. Here's them in 2006 doing "We Got Love":


Had to cut the gig short to catch Baby Gramps inside for his fourth set of the day!! I've seen Baby Gramps before and theres a lot of debate as to whether he's real or animatronic!!. Let me put you right, the guy is a total gentleman as I found out talking to him after the gig . The gig itself featured a new pirate song , and a hell of a lot of audience participation. A Baby Gramps gig is an experience you will never forget, this him with the Akron Family doing "Cape Cod Girls" on Letterman:

I'll publish as soon as I can , thanks for commenting